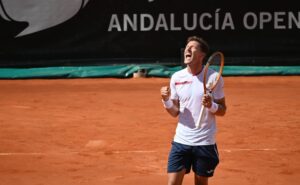 Rio de Janeiro, Oslo, Bratislava, Sydney, The Hague, Buenos Aires… These are some of the venues approved by the International Tennis Federation (ITF) for the Davis Cup Qualifiers on Friday 4 and Saturday 5 March. And next to them, Marbella, which is not even a provincial capital, but has been established in recent years in a tennis focus of the highest level. And it does not cease to give reasons for it. For two years the world number one, Novak Djokovic, has a mansion in a luxury urbanization of the Costa del Sol city, and it was the last place where he resided before his controversial trip to Melbourne in January to play the Australian Open. On the same dates, three ‘top ten’ players were exercising at the Puente Romano Tennis Club: Garbiñe Muguruza, Paula Badosa and Karolina Pliskova.

The Spain-Romania next days is the fourth Davis Cup tie to be played in Marbella, the third in Puente Romano. The first of the series was in February 1989, against Mexico, corresponding to the round of 16. Emilio Sánchez Vicario, Jordi Arrese and Sergio Casal defeated the Lavalle and Lozano team.

Later, in 2018, an attractive Spain-Great Britain was organized there, with many attractions for a high English floating population usually present on the Costa del Sol. Pablo Carreño, Roberto Bautista and Albert Ramos led the ‘Armada’ against Liam Broady and a Cameron Norrie by then half unknown still in the circuit. Nearly ten thousand people in the portable stands erected in the center court witnessed the 3-1 final. Alejandro Davidovich from Malaga, who makes his debut in the next series, was a sparring partner in the training sessions of the ‘Armada’.

In 2000, the Australian Davis Cup team even stayed at the Hotel Puente Romano to prepare for the final in Barcelona against Spain, in the first edition of the first “Ensaladera” of the Hispanics. Finally, in the bullring of Puerto Banús another elimination was held, from July 10 to 12, 2009, a 3-2 Spain vs. Germany in the quarterfinals, with Rafa Nadal, David Ferrer and Juan Carlos Ferrero playing the individual duels, with Marc López and Feliciano López in the double, and with Philip Kohlschreiber and Andreas Beck on the Teutonic side.

But the great tennis focus in Marbella is in Puente Romano. Few Spanish and even world clubs can boast the history of this institution located on the Golden Mile. There are few legends of all times who have not stepped on its courts. Perhaps Rafa Nadal and Roger Federer are among the most notable current exceptions. And not only that, few are the great tennis events that escape it: Davis Cup, WTA Tour, ATP Tour, veterans and juniors events and even a World Padel Tour tournament.

The Puente Romano Tennis Club was founded in 1979 as a complementary offer to the five-star hotel created five years earlier on Marbella’s Golden Mile. Next to the Marbella Club de Alfonso de Hohenlohe, it took its name from the 1st century Roman bridge that is located within its facilities and which is part of the ancient Via Augusta that linked Rome with Cadiz. The club was initially managed by the Swede Björn Borg (former world number one and winner of five Roland Garros and as many Wimbledon tournaments) and, later (from 1983 to 1998), by Manolo Santana, the great pioneer of Spanish tennis, who gave his name to the clubhouse many years before his death last December.