Marbella is located on the shores of the Mediterranean, between Malaga and the Strait of Gibraltar, on the slopes of the Sierra Blanca. Its municipal district covers an area of 117 km², crossed by the motorway and the toll motorway known as the Mediterranean, the main accesses to the municipality.

It is the second most populated municipality in the province and the seventh in Andalusia. It is also one of the most important tourist towns on the Costa del Sol and in the whole of Spain. During most of the year it is a centre of attraction for international tourism thanks mainly to its climate and its tourist infrastructure. Although less well known, the city also boasts a significant archaeological heritage, with several museums and performing arts venues, as well as a cultural calendar with events ranging from reggae to opera.

A key player in Spain’s early industrial revolution in the 19th century, Marbella has experienced steady growth throughout the 20th and early 21st centuries, developing an economy based on tourism aimed at middle and high net worth visitors and temporary residents.

Monuments and places of interest:

Main façade of the Casa del Corregidor, built in the 16th century in the Plaza de los Naranjos.

The old quarter of Marbella comprises the old walled enclosure and the two historic suburbs of the city: the Barrio Alto, which extends to the north, and the Barrio Nuevo, located to the east. The old walled enclosure retains approximately the same ground plan as in the 16th century. Here we find the Plaza de los Naranjos, an example of Renaissance Castilian town planning, laid out after the Christian conquest, which is the nerve centre of the old quarter. Around the square are three notable buildings: the town hall, erected by the Catholic Monarchs; the Casa del Corregidor, with a Gothic-Mudejar and Renaissance façade; and the Ermita de Santiago, the oldest religious temple in the city, which predates the square, as it is not aligned with it, and is thought to date from the 15th century. Other interesting buildings in the centre are the baroque church of Santa María de la Encarnación, begun in 1618, the Casa del Roque and the remains of the castle and the Arab defensive wall, as well as the chapel of San Juan de Dios, the Hospital Real de la Misericordia and the old Hospital Bazán, all in Renaissance style.

The Santo Cristo de la Vera Cruz hermitage, built in the 15th century and enlarged in the 18th century, stands out in the Barrio Alto. The Barrio Nuevo, separated from the walled enclosure by the Arroyo de la Represa, lacks monumental buildings, but retains its original layout and most of its simple houses of lime, tile and wooden beams, with an orchard and a small corral.

The Golden Mile and Nueva Andalucía

On the Golden Mile, that is, in the approximately four kilometres that separate the urban centre of Marbella from Puerto Banús, are located some of the most luxurious residences in Marbella, such as the Palace of King Fahd, as well as some of the most emblematic hotels, such as the Meliá Don Pepe, the Marbella Club Hotel and the Puente Romano Hotel.

Nueva Andalucía is an area that began with the tourist boom, where you can find the greatest exponent of tourism on the Costa del Sol, Puerto Banús. From the Baetica period there are finds from the Roman villa of Río Verde from the 1st century B.C. From Marbella’s industrial past in the 19th century there are traces of the pioneering Altos Hornos de Marbella, as three of the four blast furnaces and some of the buildings that made up the Ferrería la Concepción ironworks are still preserved, albeit in poor condition. 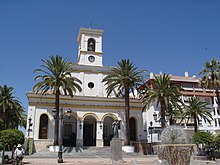 In San Pedro Alcántara some of the buildings that made up the 19th century agro-industrial complex of the San Pedro Alcántara Agricultural Colony are still preserved. For example, the Trapiche de Guadaiza which housed the model farm and is now a cultural centre; the Sugar Factory or Alcohol Factory which is now a performing arts centre; the Villa San Luís where the Cuadra Raoul family, owners of the colony, lived and which is now the building of the Mayor’s Office; some houses of the original nucleus of the colony; the Church of San Pedro de Alcántara and elements of the hydraulic infrastructure for the irrigation of the colony, such as the Salto del Agua and Las Medranas reservoirs.

In the vicinity of the mouth of the river Guadalmina, there are some of the most important archaeological sites in Marbella: the Paleochristian Basilica of Vega del Mar from the 4th century A.D. and the Roman baths of Las Bóvedas from the 2nd century A.D. From the defensive complex of the coast of the Kingdom of Granada from the 16th century, the watchtower of Las Bóvedas has been preserved.

Also of note is the Cerro Colorao site, located next to the municipality of Benahavís.

In the eastern part of the municipality, in the district of Las Chapas, the site of Río Real stands out, located on a promontory near the mouth of the river that gives it its name. It is a settlement that possibly dates back to the 8th century B.C. and was probably a Phoenician site, given that it is close to some ancient iron mines. Dishes, carinated bowls, lanterns and pottery of Phoenician and other indigenous and Greek types have been found here. Two other crenellated towers are also located here: the Torre Río Real and the Torre Ladrones. Among the tourist establishments, the Ciudad Residencial Tiempo Libre, an architectural ensemble of the modern movement registered as an Asset of Cultural Interest since 2006, and the former Marbella Hilton Hotel, currently Hotel Don Carlos, the work of the architect Melvin Villarroel, in the same style as the former, are noteworthy.

The 27 km of Marbella’s coastline are divided into 24 beaches of different characteristics, although, due to the urban expansion of the municipality, all of them are urban or semi-urban beaches. In general, they are beaches with moderate waves and fine, medium or coarse-grained golden or dark sand, and it is also possible to find some gravel beaches. The degree of occupation is usually high or medium, especially during the summer months, when the arrival of tourists is concentrated. 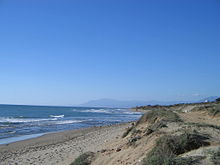 These include Artola or Cabopino beach, located in the protected area of the Artola Dunes, next to the port of Cabopino, as it is one of the few nudist beaches in Marbella; Venus and La Fontanilla, which are central and very popular; and those of Puerto Banús and San Pedro Alcántara, which have a blue flag. The most famous beaches in Marbella are Puente Romano beach, the beaches of Las Chapas such as Cabo Pino or Don Carlos, which are fine sandy beaches with hardly any pebbles. In the centre of Marbella there is the Faro beach, the Cable beach and even the Funny Beach, which is the closest beach to the arch of Marbella. Finally, there is one of the most popular beaches for tourists, the beach of Puerto Banús, frequented by celebrities and people with high purchasing power. Apart from the beaches, Puerto Banús is famous for its nightlife.